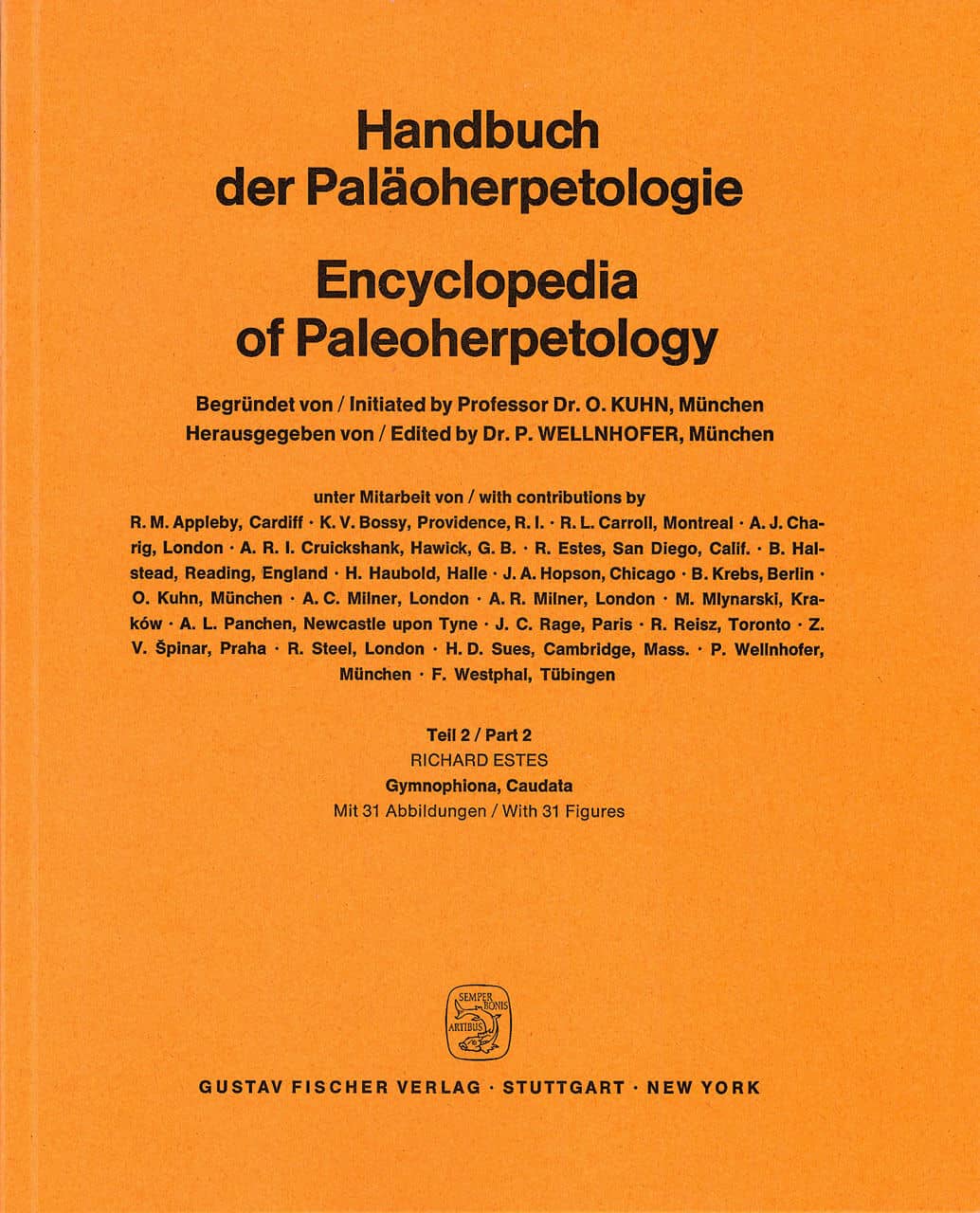 A number of summaries or lists of fossil finds of salamanders have been made (e.g. KUHN 1938, 1962; ESTES 1965b, 1970; BRAME 1958, 1967; TIHEN 1968, CARROLL 1977, CARROLL and WINER 1977), but no comprehensive discussion of the fossil record of the group as a whole has been available. This is the result of several factors. The group is a small one and the delicacy of salamander skeletons has made them infrequently recovered as fossils. The relative simplicity and high variability that characterizes the salamander skeleton makes the search for discriminating character states a frustrating one. Interpretation of the remains has thus been difficult. Controversy has often arisen owing to the extensive paedomorphy that has operated in salamander evolution and the consequent difficulty of determining character state polarity or defining taxa and trends.

Most salamander fossils are of Cenozoic age; few Mesozoic finds are known, and those almost entirely from the Upper Cretaceous. Almost half of the fifty-six genera recognized here as fossils are referable to Holocene genera. Of the thirteen recognized families only four are extinct, and representatives of all living families except Hynobiidae have been described.

While the salamander fossil record is not extensive, it is probably a reasonable indication of past diversity in the sense that only the Hynobiidae remain unrepresented as fossils. The strongly endemic nature of the Holocene salamanders suggests that the relatively poor record of fossil salamanders in eastern Asia is responsible for the lack of hynobiids in the record. Salamanders appear also to have been restricted for a great part of their history to the northern continents, as indicated both by their present distribution and their fossil record.

Classification of salamanders into families has been relatively stable; few workers have disagreed with the boundaries established long ago and for the most part continued today. Controversy has arisen, however, in grouping of these families into suborders or superfamilies. NOBLE (1931) developed an arrangement that has been widely followed. WAKE (1966) and REGAI (1966) made some rearrangements but did not differ substantially from NOBLE. EDWARDS (1976) has reanalyzed older data and included new material on the pattern of spinal nerve exit from vertebrae. This arrangement is the most comprehensive yet published and although not computer-generated, was constructed according to cladistic methodology. NAYLOR (1978c) offered a conventional phylogenetic classification utilizing available data as well as adding his own studies on the vertebral column and trunk musculature. PRESCH (ms) is working presently on a cladistic phylogeny that will include all available data. All of these recent classifications agree with older ones (e. g. NOBLE 1931) in placing cryptobranchoids as primitive, salamandrids and plethodontids as highly derived. These classifications differ as to placement of the highly paedomorphic families Sirenidae, Proteidae and Amphiumidae, once again showing how the paedomorphic trends in many salamander groups have confused the evaluation of relationships. The extinct families pose still another problem since they cannot be sampled for important data on biochemistry, courtship, karyology, and other data based on soft structures; they must therefore be placed in any phylogenetic scheme on the more subjective aspects of general similarity and the few osteological features known for them.

Salamanders, as the most primitive living amphibians, have offered few clues to the ancestry of the group. Controversy has been as common in interpretation of salamander origins as it has in interpretation of taxa. The factors identified above that have caused difficulty in interpreting fossil salamanders have resulted in several elaborate attempts to delineate salamander ancestry – attempts that have been largely unsuccessful. One area of controversy has been whether living amphibians form a monophyletic group Lissamphibia (e. g. PARSONS and WILLIAMS 1963; BOLT 1977) or whether they have been derived from unrelated groups of Paleozoic amphibians (e.g. WAKE 1970; CARROLL and HOLMES 1980). Another area of controversy involves identification of the particular group of Paleozoic amphibians from which salamanders are derived. Some workers have favored the labyrinthodonts, specifically the dissorophoids (e. g. ESTES 1965b; BOLT 1977); others have sought urodele origins in the lepospondyls, in particular the microsaurs (e.g. CARROLL and CURRIE 1975). The enormous morphological and chronological gap that separates salamanders and Paleozoic forms makes it difficult to choose from these alternatives. The latest Paleozoic types of amphibians are Triassic; the earliest authenticated salamanders are Upper Jurassic. While the best known Upper Jurassic form (Karaurus) superficially resembles the labyrinthodonts owing to its extensive skull casque of sculptured dermal bone, it has a highly derived palate and is otherwise not like Paleozoic forms.

Other workers, particularly JARVIK (e.g. 1980), have hypothesized an origin of salamanders within the lobe-finned fishes, and separate from that of other amphibians. JURGENS (1971) has provided the most recent evidence negating this view.

These classifications and problems associated with the origins of salamanders will be discussed in more detail in the text of this volume. This brief discussion, however, indicates that we are still far from a coherent picture – much less a consensus – of salamander interrelationships. Moreover, while progress is being made, the great gaps in the fossil record have not yet permitted us to evaluate the position of salamanders vis-à-vis other amphibians in any satisfactory way.