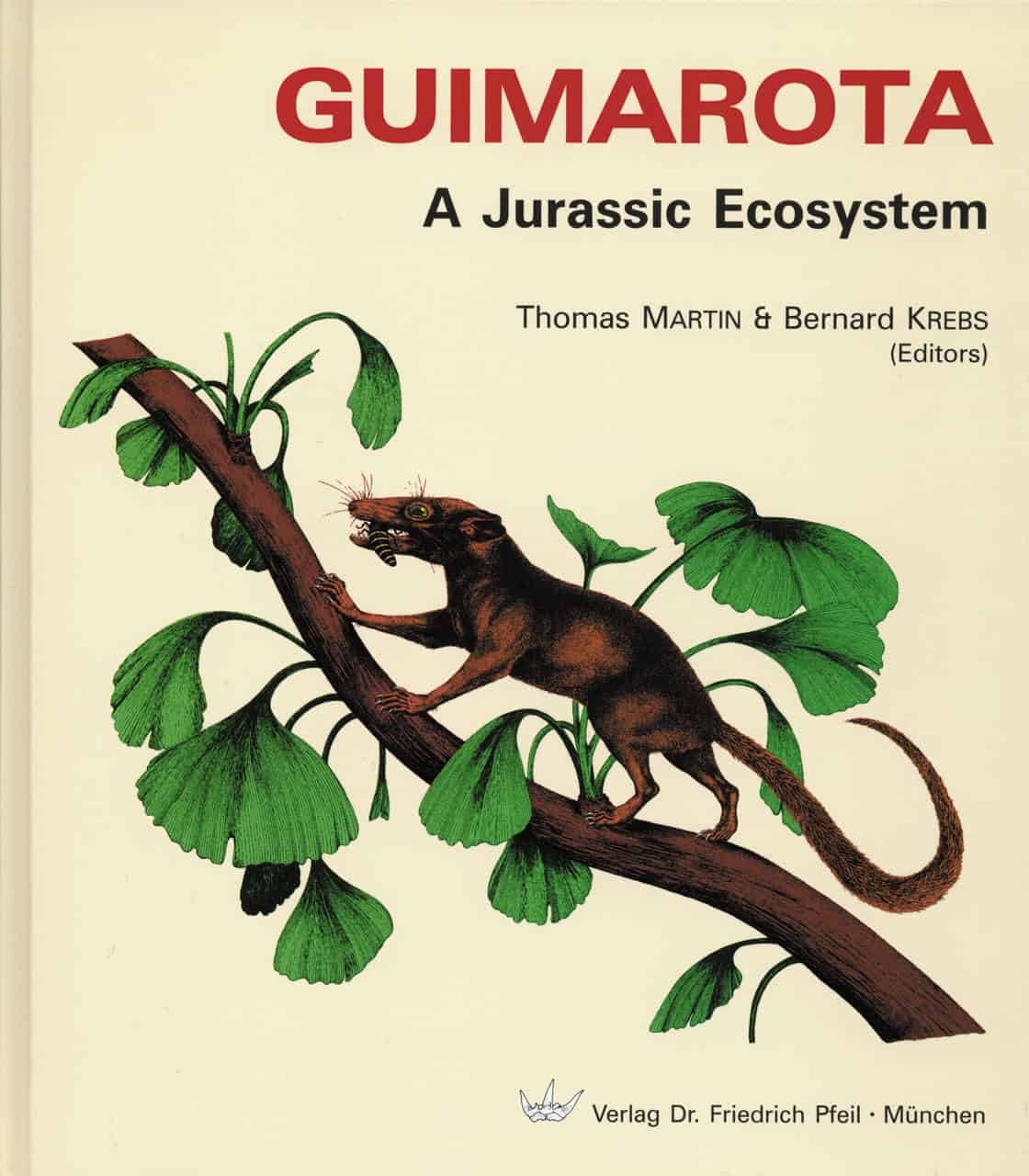 The Guimarota coal mine in central Portugal is the most important fossil locality in the world for Late Jurassic mammals and other small vertebrates. From 1973 to 1982 the mine was worked exclusively for paleontological purposes all year round, which represents one of the most ambitious enterprises in the history of paleontology. Tens of thousands of skulls, jaws, bones, and teeth of terrestrial and aquatic vertebrates and countless invertebrate and plant remains were collected. A great international sensation was created by the discovery of the first complete skeleton of an ancestor of modern mammals.

Twenty specialists from geo- and biosciences summarize in 21 chapters the latest findings of more than 30 years of interdisciplinary research on the Guimarota locality. The book deals with the history of discovery, excavations, geology, stratigraphy, paleobiology, and paleoecology of the fossil locality. It is illustrated with many large size colour prints and provides an exciting insight into a Late Jurassic ecosystem at the eastern shore of the Proto-North Atlantic, at a time when giant dinosaurs ruled the world and tiny mammals had just begun their careers.

The book will be of interest not only to paleontologists and geologists, but also to students and scholars of the bio- and geosciences. It should also be welcomed by a more general public interested in palaeontology, geology, and evolution.

The evolution of life on earth, which began more than three billion years ago, is a unique historical process. It cannot be recapitulated in laboratory experiments, or recalculated on a computer. Only fossils, the remains of plants and animals of former times, can provide us with information about it. The science of paleontology, the historical branch of the biological sciences, investigates the evolution of the biosphere of the earth. During the last two hundred years, paleontologists have developed a more or less secured picture of this constantly changing living world. However, many gaps remain in our understanding of these events. Especially the origin and early stages of the evolution of several large and important groups of animals and plants are still in the dark. The beginnings of mammals is an example that affects us in particular, since it concerns our own ancient roots, but the early history of other vertebrate groups, like that of modern amphibians (frogs and salamanders) and lizards and snakes, is also still poorly understood. We know their distant ancestors quite well, which were diverse and widely distributed in the Late Paleozoic (“ancient life”; the era of fishes and amphibians) and the Triassic, the oldest period of the Mesozoic (“middle life”; the era of reptiles). These ancestors are the stegocephalians (primitive amphibians with a complete skull roof) in the case of amphibians, basal diapsids (reptiles with two pairs of openings in the posterior part of the skull roof) in the case of lizards and snakes, and the so-called mammal-like reptiles in the case of the mammals. These generally rather large ancestral taxa disappear at the end of the Triassic with few exceptions, some of which are still alive today as “living fossils”, such as the tuatara in New Zealand. After the Triassic, there is a long period with little fossil evidence of the evolution of these lineages in Earth history. This gap in the fossil record spans the Jurassic and most parts of the Cretaceous, thus a period of some one hundred and fifty million years. Only at the end of the Cretaceous, the fossil record becomes better again, apart from the recently discovered extraordinary fossil localities in the province of Liaoning in north-eastern China. The mammals in particular experience a radiation from the latest Cretaceous on onwards, which is rapid according to geological time scales, so that it is often referred to as an “explosive” radiation, although it took several million years.

The gap mentioned above is based on a poor fossil record, since there must have been a continuous evolution from the ancestors to the successful descendants of the Cenozoic. Moreover, separate and often fragmentary remains of these transitional forms have been found. The poor fossil record of frogs, salamanders, lizards and snakes, and mammals in the Jurassic and Cretaceous can be explained as follows:

The animals are very small and furthermore lived on dry land, where their chances of becoming fossilized are much lower than those of aquatic organisms. The latter sink to the bottom of the oceans, lakes or rivers, where they are rapidly buried by sediment and are thus preserved. On the dry land, the corpses are usually unprotected by sedimentary covering and thus subject to destruction by scavengers and weathering. Only if they are washed into a body of water – rivers, lakes, lagoons, near-shore marine waters – they stand a chance of preservation. In this respect, swamps are also important, where incompletely decayed plant remains slowly turn into brown coal in stagnant, oxygen-poor waters. Corpses that happen to get into these hostile environments are usually safe from scavengers and no parts of the body are transported away. Another special case in the preservation of terrestrial animals are fissure fillings that form on calcareous plateaus. Often thousands of jaw- and skeleton remains are found in the clay that fills the fissures. However, mainly isolated bones and teeth are found in these localities, since the skeletons are usually completely disarticulated.

Europe – the best known area of the world in terms of paleontology – was largely covered by oceans in the Jurassic and Cretaceous. The famous European vertebrate localities from this era, such as Holzmaden and Solnhofen, contain an almost entirely marine fauna. Only during geologically short intervals, small areas of Europe emerged and formed islands of dry land.

As mentioned above, the ancestors of mammals and other modern terrestrial vertebrates were small animals. Large animals are specialized in terms of their large size alone; they have a long evolutionary history and generally are final forms. Remains of such large animals (e.g. dinosaur bones) are found by chance, they attract the attention of quarry workers, geologists, or interested laymen. The tiny bones and teeth of amphibians, lizards and small mammals, however, cannot be discovered without special equipment.

The paleontologist Walter Georg Kühne, the founder of the professorship and later the Institut für Paläontologie at the Freie Universität Berlin, was the first to dedicate his work to the systematic search for evidence concerning the early evolution of mammals. This was only part of his inclination to use theoretical considerations to discover objects and materials that are difficult to find, including amber and gold. Until then, paleontologists had only worked with chance discoveries, or carried out excavations or expeditions in areas that had yielded remarkable fossils by chance before, like Wyoming (USA), or the Gobi desert (Mongolia).

Being aware of the reasons for the poor documentation of Mesozoic mammals given above, W. G. Kühne began prospecting. First, Jurassic or Cretaceous fresh-water deposits had to de found. Even though such deposits do not have wide distributions in Europe – work in other parts of the world was out of the question in the 1950ies – the search had to be restricted to the most promising areas. Kühne thus used so-called indicator faunas, especially finds of dinosaurs, which were published or listed in museum catalogues. Early mammals, contemporaneous with dinosaurs, and, like the latter, inhabitants of terrestrial environments, were consequently found in several of these localities. In accordance with the small size of the objects he was looking for, methods that were devised for micropaleontological research had to be used.

Fissure fillings also attracted the attention of W. G. Kühne. First successes in southern England and Wales, though, could not be repeated in continental Europe. However, Kühne paid special attention to brown coals, which he knew as vertebrate localities from the – admittedly Tertiary – coals of the Geiseltal from his times as a student in Halle/Saale. He knew from his experience that there was the possibility to find not only isolated bones and teeth, but more complete remains, like skulls or even complete skeletons in brown coals. However, in this type of localities, no indicator faunas were to be expected; never had dinosaur bones been found in Mesozoic brown coals. Therefore, Kühne had to visit all Jurassic and Cretaceous brown coal localities in Europe. He found the information he needed to do this in the geological literature, or in talks with field geologists. It was in the framework of these prospecting activities that he discovered the coal mine of Guimarota. 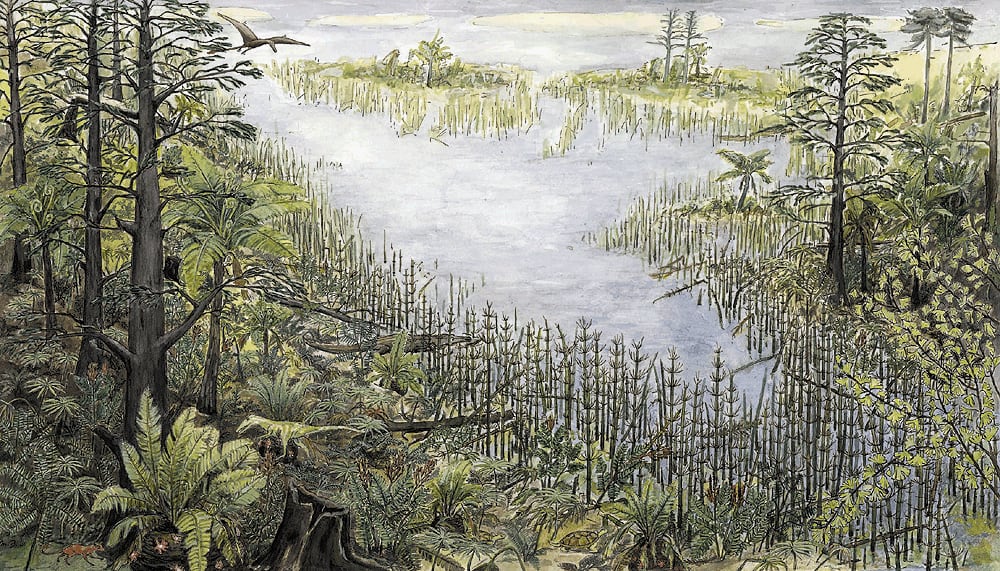