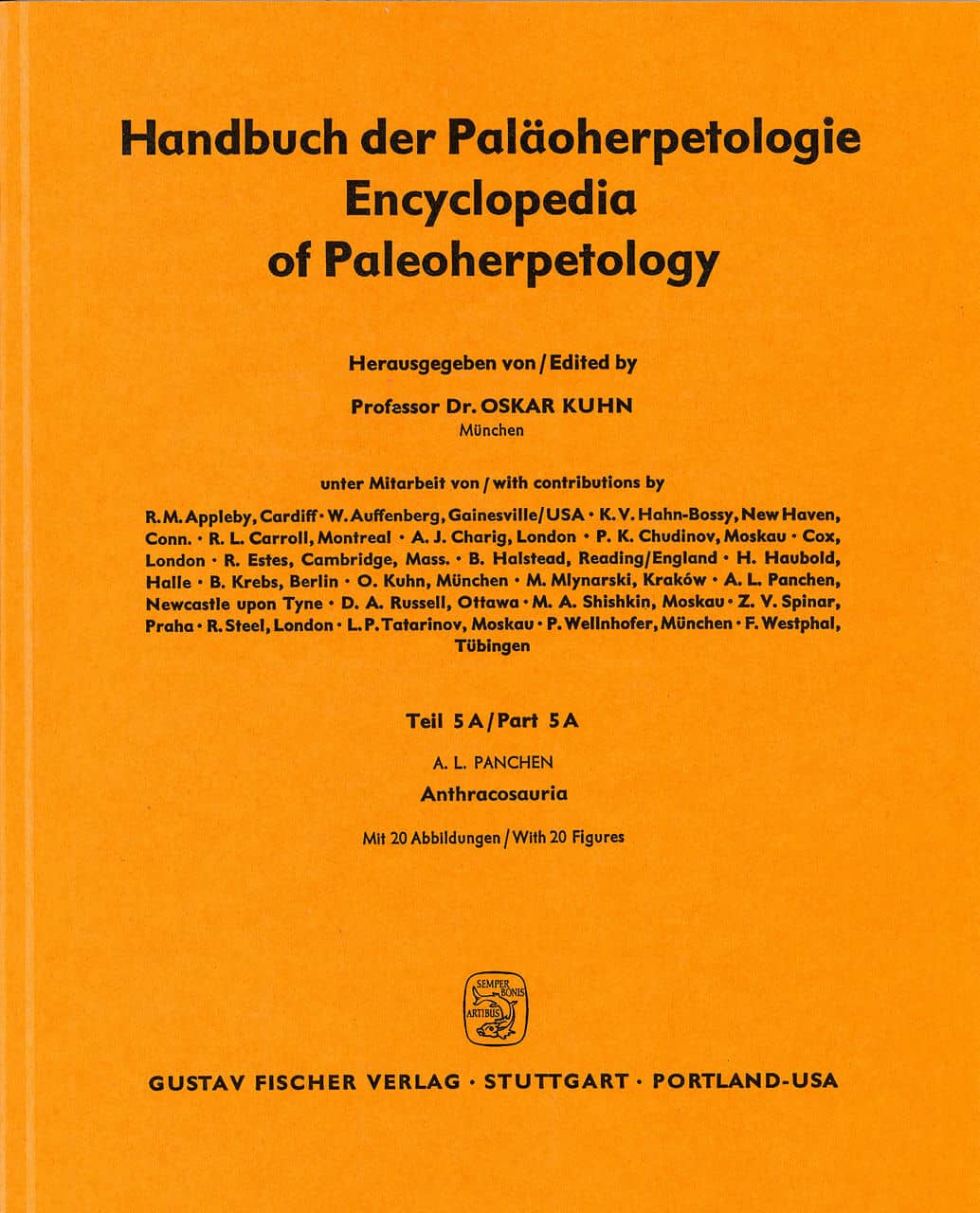 The anthracosaurs, using the term in its original sense, are a group of usually large aquatic Amphibia from the Carboniferous and lower Permian. They have the full complement of dermal bones of the skull roof found in primitive tetrapods and to a variable extent the roofing bones of the skull are ornamented in characteristic ‘pit and ridge’ fashion. The vertebral centra consist of two regions, a pleurocentxum and an intercentrum, and the teeth in cross-section demonstrate a characteristic labyrinthine infolding of the dentine.

All these features characterise them as members of the amphibian subclass Labyrinthodontia, but they differ from the vast majority of (temnospondyl) labyrinthodonts in several important features: the tabular bones on either side of the back of the skull table are elongate anteromedially to contact the parietals and posteriorly to produce a characteristic horn; a remnant of the skull kinetism found in rhipidistian fish is retained in the movable contact between the sides of the skull table and the squamosal bones of the cheek region, and the vomers are narrow and toothless.

The body was long and anguilliform with small limbs : where known the manus and pes bear five principal digits. In the vertebrae the pelurocentrum is the larger central element and is firmly attached by broad facets to the neural arch. The intercentrum is, however, also a complete but narrower disc and both are centrally notochordal. The vertebrae, known after COPE as embolomerous, are diagnostic.

Some of the characters noted above are shared with a group of labyrinthodonts known, after Seymouria from the lower Permian of Texas, as the Seymouriamorpha (s.l.). These, however, were short-bodied forms lacking the tabular horn and usually the kinetic skull table and with a strongly reduced crescentic intercentrum. Nevertheless the Anthracosauria and Seymouriamorpha are normally grouped together as a major taxon, distinct from all other labyrinthodonts, termed by ROMER (1947, 1966) the Anthrocosauria (s.l.).

Some of the features shared by the anthracosaurs and the seymouriamorphs are also characteristic of early reptiles and for this reason the anthracosaurs have long attracted attention as potential reptile ancestors, while the known seymouriamorphs have been regarded as relict intermediate forms. The importance of the anthracosaurs in this respect was strongly emphasised by the work of D. M. S. WATSON who also sought to show that their primitive anatomy and early geological occurrence made them ideal intermediates between rhipidistian fish and later tetrapods.

The anthracosaurs are most characteristically found as a rare element of the fauna of the British Coal Measures and the corresponding period of the North American Pennsylvanian. British finds are almost always found closely associated with coal seams, usually in a canneloid shale or ironstone roofing the seam and were undoubtably members of a coal swamp fauna. The name anthracosaur, after the Scottish Anthracosaurus russelli HUXLEY, refers to this. The body form and small limbs also suggest that they were persistently aquatic.

It is probably advisable to say something at this point about the usage of the term Anthracosauria although this is developed historically in the next section. The original usage, formalised by SÄVE-SÖDERBERGH (1934) and employed in this monograph, includes only the embolomerous long-bodied Amphibia characterised above. It is probable that among the labyrinthodonts embolomerous vertebrae are confined to this group as argued by ROMER (1947) who terms them the Embolomeri. WATSON, however, on strong negative evidence thought otherwise and his grade Embolomeri included temnospondylous labyrinthodonts. His usage of Anthracosauroideae (1929) was, however, quite unambiguous. ROMER’s usage includes the Seymouriamorpha, as noted above, and also some forms which he claims have pre-embolomerous vertebrae, notably Pholidogaster.