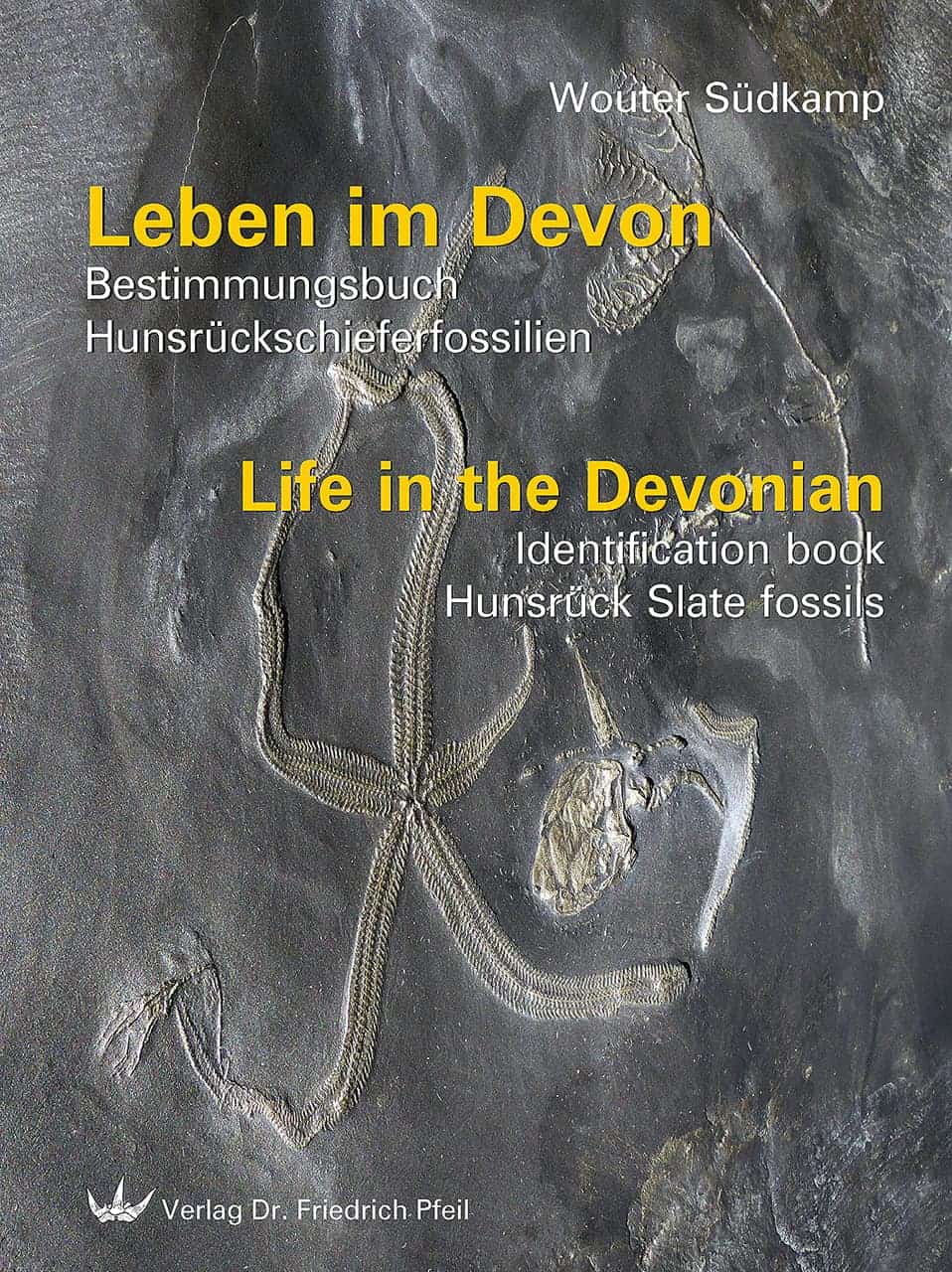 Life in the Devonian

The Hunsrück Slate in south-western Germany belongs to the most important fossil deposits of the world. The sediments came into being in the former subtropical shallow sea during the Devonian age for more as 400 million years ago. Thanks to the special geologic conditions the Hunsrück Slate turned out to be a valuable “archive” with an exceptionally preserved and diverse fossil flora and fauna. It dates from the period, in which the dry land was conquered by the first real land plants and fishes and cephalopods, like ammonoids, developed rapidly and occupied the ecological niches in the head of water.

The book is the most complete summary of these remarkable fossils. About 190 genera are presented and the reader becomes aid in assigning the fossils. Of each genus the characteristics, rarity and finding localities and eventually an explanation of the name, species description, size reference and peculiarities are mentioned. All genera are illustrated with one or more pictures. Just like this the supporting drawings have been chosen, so that the important characteristics for determination can be recognized. The author has specialized himself as a long-standing fossil collector on the fossils of the Hunsrück Slate. He tries to assign his collection passion for these beautiful fossils to the reader. With it theory and praxis go hand in hand and the latest scientific knowledge came into consideration. The book turns its attention not only to researchers and students of earth sciences and biology, curators of collections in natural history museums, but also to amateur geologists, fossil collectors as well as to natural historian readers (from the region).

The idea for this book dates from the late nineteen seventies, just as I started collecting slate fossils at Bundenbach. Up until today, there is no work that targets the identification and complete summary of the renowned Hunsrück Slate fossils. Now is the right moment to publish such a book: 1 The unique fossil finds of the nineteen nineties from the Bundenbach quarry Obereschenbach are scientifically described for the most part (among others annelids and arthropods). 2 My systematic fossil collecting at old tip heaps within and outside the fossiliferous layers gives a fairly representative idea of life at that time. 3 No new finds can be expected, because a resumption of slate mining in the so-called Lagerstätte is unlikely (imported slate from abroad). In this book several specimens from private as well as museum collections are shown for the first time, including many fossils never previously-portrayed (in a book). Among them are not only aesthetically appealing specimens but also the smaller fossils, frequently overlooked by the splitters. As well, I attach great importance to stories behind the fossil associations. Although these do not necessarily contribute to the taxonomic assignment, I want to enlighten the reader on the living conditions in the Hunsrück Sea of that time. Over 150 years of intensive production of roof-slate and scientific research does not guarantee that this book can be totally comprehensive. Specific (rare) fossils, like sponges, asterozoans and crinoids await (re)description. Partly I anticipate this matter, as I describe fossils in open nomenclature (?rhizostomoid scyphomedusa) or in normal type (sponge Nodosia and brittle star Eschenbachia) or classify in another genus (mitrate Anatifopsis). So, these descriptions must be considered as preliminary. I hope that this book encourages further research and leads people to appreciate and notice these spectacular witnesses of earlier life more.

Palaeontology deals with the organisms of prehistoric times and it is its task to reconstruct the history of life on the earth. Unfortunately, the fossil record is often incomplete and leaves many questions unanswered. Only in rare cases can we gain an immediate and unusually complete insight into former living spaces. This book reports on one of these rare lucky chances. The ca. 400 million years old Hunsrück Slate belongs to the remarkable fossil sites of the world and is the most important example of a conservation Lagerstätte for the marine Devonian. Fossils from the Hunsrück Slate are represented in all large museums of natural history of the world, and provide evidence of the variety of life forms in the seas from inconceivable ages ago. The author of this volume – Wouter Südkamp – is an enthusiastic collector, expert and experienced preparator of Hunsrück Slate fossils. He has, not only by his extensive collection activity but also by his own investigations of the fossils integrated with geology, in multiple ways contributed to the exploration of this world-famous fossil occurrence. In doing so, the Hunsrück Slate discloses its treasures, not without considerable resistance. The scientific value but also the aesthetics of the finds are shown to their fullest potential only after careful and patient preparations. In this field, Wouter Südkamp is one of the leading specialists, and his finds repeatly lead to a better understanding of the rich fauna and their life circumstances. In particular I want to emphasize, that he has always made his finds available for scientific study. This book is addressed to fossil collectors and to nature lovers in general, who are interested in deeper insights into the extraordinary habitat of 400 million years ago. This is the great value of this volume. It not only shows the enormous variety of life in the Devonian seas, but also the beauty of these life forms, as they are preserved for us as fossils. I hope that the book communicates to the readers something of the enthusiasm and fascination of paleontological research, and encourages further activities with fossils.

This book could not have been materialized without the participation of scientists and amateur palaeontologists. Prof H. Kerp (Asterocalamites), Prof D. Blake (asterozoans), Prof H. Pfanz (sedimentary structures), Dr H. Van Iten (cnidarians), Dr U. Jansen (brachiopods), Dr C. Winkler Prins (molluscs and brachiopods), graduate geologist M. Alberti (trilobites) and R. Goßmann (plants) have assisted in the acquisition of literature and with the assignment. Dr G. Kühl (Bonn), Dr U. Jansen (Frankfurt), Dr C. Bartels (Kamen), M. van Bel (Bad Kreuznach), G. Beicht and M. Brzoska (both Bundenbach), L. Dreher (Griebelschied) and Mrs. C. Schumacher (Simmern) helped by the provision of the exhibits for photographing. C. Friis (Kottenheim) informed about finding localities in the “Moselschiefer”. The museum directors, -photographers and collectors, who offered to give up photos, can be taken from the photo credit. My wife R. Südkamp-Theis, Dr-Ing. H. J. Theis and Mrs. H. Koch took care of the correction of the German text. The English text was corrected by Mrs. Dr C. Burrow. I would like to thank all these participants for their efforts.

Wouter Südkamp, born 1954, Dutchman, is a graduate geographer. He worked as management consultant for environmental matters in several organisations. He was active in the Dutch Geological Association and finally 7 years president of its largest regional association in Utrecht/’t Gooi. Since 1978 he is a specialist in collecting, preparing and describing his finds from the Hunsrück Slate. After his emigration to Bundenbach in 1996 he was able to increase this passion further. His extensive collection (nearly 1000 pieces) is stored in the Hunsrück-Museum at Simmern. He has written 25 contributions for the journal FOSSILIEN and 8 scientific papers. He is carrying out geological excursions with fossil and mineral hunts in Rhineland-Palatinate and is active in adult education. 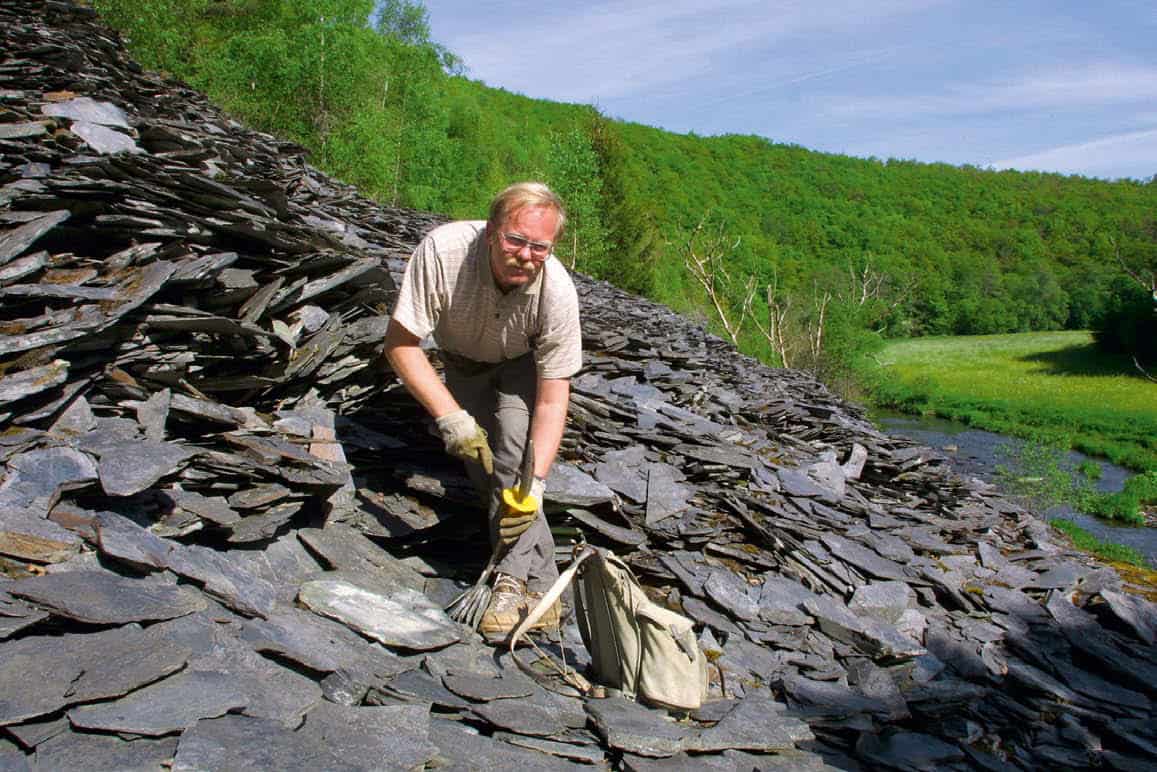 The author during collecting at a slate dump. – Photo: P. Stein, Koblenz. 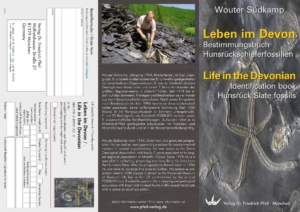 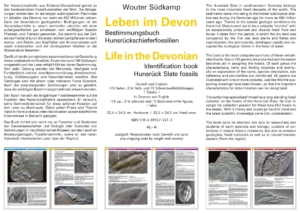 Be the first to review “Life in the Devonian” Cancel reply