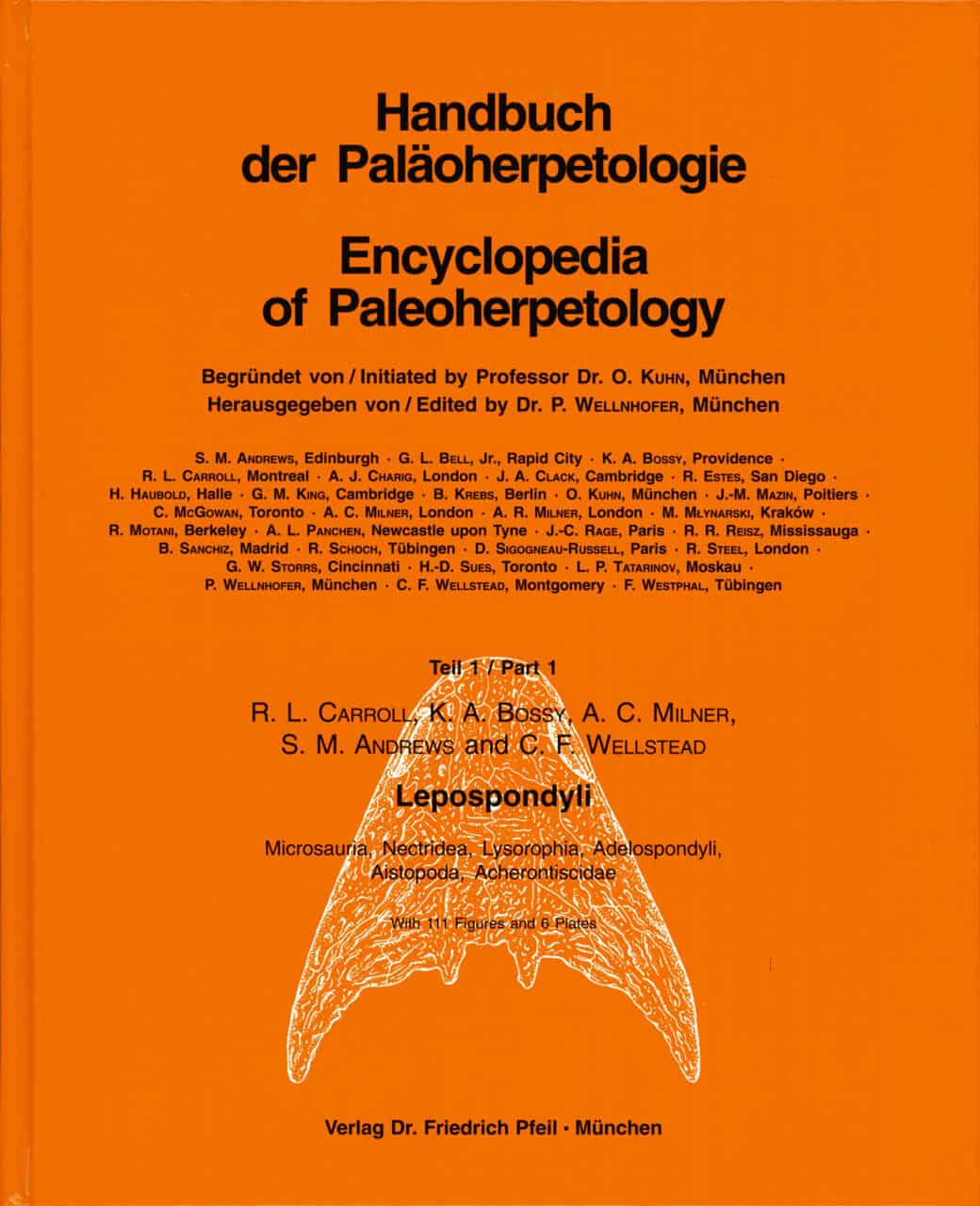 This volume includes descriptions of a number of amphibian groups commonly referred to as lepospondyls. Three groups, now considered as orders, have long been included among the lepospondyls: the microsaurs, the nectrideans, and the aïstopods. Two clearly distinct families, the Lysorophidae and Adelogyrinidae, have been associated with the microsaurs or treated as separate groups within the lepospondyls. They are here placed in separate orders. The lepospondyls encompass a wide variety of small animals that differentiated near the base of the Lower Carboniferous and persisted for at least 75 million years, to the end of the Lower Permian. Together they show more anatomical diversity than do all the living amphibian orders. Despite the many autapomorphies of the individual groups, recent phylogenetic analysis does support a common ancestry of the lepospondyl orders.

This volume will include descriptions of a number of amphibian groups commonly referred to as lepospondyls. This term was coined by ZITTEL (1888) to include Paleozoic amphibians in which the notochord was persistent and enclosed in constricted bony cylinders, hourglass-shaped in longitudinal section and in which the teeth were simple (without labyrinthine infolding), conical and hollow.

The lepospondyls encompass a wide variety of small animals that differentiated near the base of the Lower Carboniferous and persisted for at least 75 million years, to the end of the Lower Permian. Together they show more anatomical diversity than do all the living amphibian orders, including a number of elongate, limbless lineages, families that resemble terrestrial salamanders and lizards, and many genera that are without parallels among any other groups, fossil or living.

Three groups, now considered as orders, have long been included among the lepospondyls: the microsaurs, the nectrideans, and the aïstopods. Two clearly distinct families, the Lysorophidae and Adelogyrinidae, have been associated with the microsaurs or treated as separate groups within the lepospondyls. They are here placed in separate orders. One poorly known genus, Acherontiscus, is the only form that combines significant features of labyrinthodonts and lepospondyls. It cannot be determined whether it is a relict of an early stage in the evolution of lepospondyls or if this genus represents a separate lineage that convergently evolved some lepospondyl characteristics. In addition to the characters used by ZITTEL to differentiate lepospon­dyls from the other major assemblage of Paleozoic amphibians, the labyrinthodonts, all lepospondyls (excluding Acherontiscus) are characterized by the presence of a single, cylindrical vertebral centrum that is specialized for articulation with the skull, the absence of a squamosal embayment at the posterior margin of the skull, and the absence of paired fangs and replacement pits on the palate. Use of the term Lepospondyli implies that these groups evolved from a common ancestor in which these features were already present. As yet, this cannot be directly documented from fossil evidence. No species has been recognized as a plausible common ancestor of the lepospondyl orders. Details of cranial anatomy, the general body form, and presumed ways of life of the various groups are very distinct, and even the earliest members of each order are highly specialized and show little evidence of having evolved from a common pattern.

Despite the many autapomorphies of the individual groups, recent phylogenetic analysis does support a common ancestry of the lepospondyl orders (LAURIN and REISZ, 1997; CARROLL, 1995). On the other hand, sister-group relationships with other known Paleozoic tetrapods remain controversial. None of the other groups of Carboniferous amphibians have been described from beds older than those containing the oldest lepospondyl, which already shows most of the unique derived features that characterize the known orders. There is no evidence that these characters were shared by early members of any other tetrapod group. Lepospondyls do share derived skull and limb features in common with primitive temnospondyls and anthracosaurs, to the exclusion of Devonian tetrapods and Crassigyrinus, but show a clearly divergent pattern of the articulation between the occiput and the first cervical vertebra and the anatomy of the first cervical. Together, the distribution of these characters suggests the divergence of a separate lineage leading to the lepospondyls, near the base of the assemblage including anthracosaurs and temnospondyls.

Loss of the squamosal embayment, palatal fang and pit pairs, and labyrinthine enfolding of the dentine, as well as reduction in the number of bones of the dermal skull roof, are all shared with early amniotes. All of these characters may be attributed to small skull size and are not necessarily indicative of close relationships. Other features of the skull, the configuration of the cervical and trunk vertebrae, and limb structure support close affinities of amniotes with anthracosaurs (specifically the diadectomorphs), rather than to the lepospondyls. Nevertheless, phylogenetic analysis of a much larger number of characters among all Paleozoic tetrapods supports a sister-group relationship between lepospondyls and amniotes (including diadectomorphs).

Lepospondyls may also be implicated in the origin of some or all of the modern amphibian orders. LAURIN and REISZ’s (1997) phylogenetic analysis places caecilians, urodeles, and anurans as a succession of derived lineages nested within the Lepospondyli, and earlier studies had suggested close affinities of caecilians and salamanders with the microsaurs. Clearly, an understanding of the diversity and anatomy of lepospondyls is vital to any study of the origin of the modern amphibians, as well as for an appreciation of the pattern of evolution of early land vertebrates.

Be the first to review “Lepospondyli” Cancel reply